Â Background: Glaucoma is one of the major public health problems. Lowering intraocular pressure has been shown to inhibit the progression of glaucomatous optic nerve damage which depends on compliance with the treatment.

Â Objectives: To determine the extent of noncompliance to treatment among glaucoma patients at Menelik II Hospital. Methods: A hospital based cross sectional study was conducted on patients who were on topical anti glaucoma treatment and follow-up at glaucoma clinic, Menelik Hospital during May 1 to July 30, 2014. Four hundred one eligible patients were interviewed with a pretested structured questionnaire by the principal investigator. Medical charts of each patient were reviewed for specific information like type of previous procedures and visual acuity.

Â Results: Among the 401 patients interviewed , 230 patients (57.4%) were found to be noncompliant. Younger ages, higher educational level, previous history of procedures for glaucoma were associated with better compliance. Factors associated with noncompliance included poor vision, more than one drug therapy, fair or poor understanding of the disease, use of other systemic medications, unavailability of drugs in the market, dependency on others for instilling the drops. Sex, side effects of the drugs, number of years with glaucoma and family history were not found to be predictors of noncompliance. The main reasons given by the participants were forgetfulness, followed by running out of medications before visiting the clinic.

Â Conclusions: The study has indicated the presence of substantial noncompliance of glaucoma patients at a tertiary center. More attention to the issue of noncompliance, including health education and use of memory aids, could result in important benefits in the preservation of sight. [Ethiop. J. Health Dev. 2015;29(1):31-36] 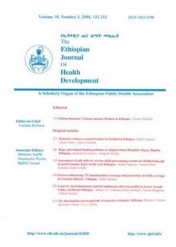